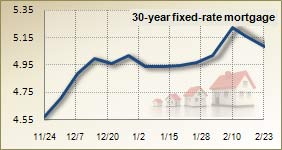 Marin buyers who were waiting for bottoms may have seen one low point pass in the last few weeks: mortgage rates…..

Buyers who are waiting for the bottom of the prices will know only when that milestone has passed, as well….and unfortunately those who need mortgages may be paying the different with a higher monthly payment.